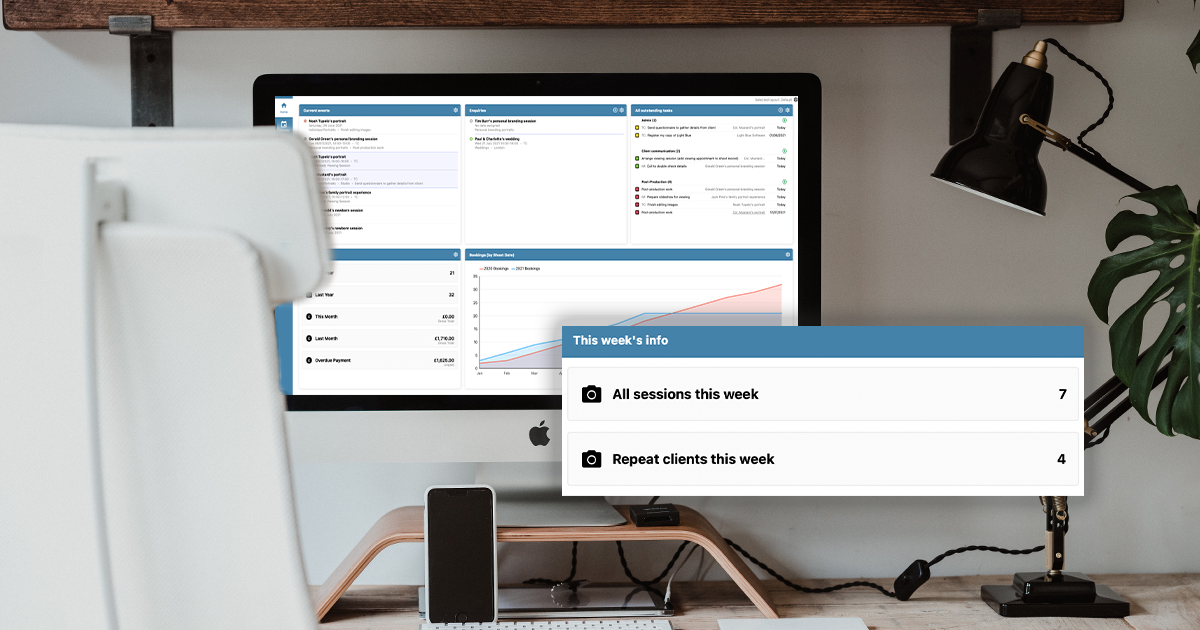 We all work hard to find different ways of attracting new clients and bringing in new business, but how much untapped potential is there in the list of clients you’ve worked with before?

We spoke to Brentwood newborn photographer, Kristina Mack about how she was able to use her existing customer list to fill the diary.

When it comes to building your photography business’ brand, it needs to consistent across every touch point with clients and prospects.

From a slick website to a memorable logo and across every possible form of communication, cohesively conveying what your brand stands for is crucial.

But have you given much thought to your photography business’ email signature?

If not, read on for our top tips on how to get it right and why using a professional photography email signature can play its part in both attracting and retaining clients.

2021 has been a rollercoaster year for many of us, but we’ve got a lot to look back on and celebrate. We hope you’re able to take some time to take a look back at and celebrate the positive things from your year, too! It’s certainly been a busy one for us and we want to share a few of the things that we’re particularly proud of.

We’re still here to help over the festive season, but we’re also going to be taking a bit of a break so won’t be answering emails quite as quickly as normal between Christmas and New Year:

Wishing you all the best,

We’re delighted to let you know that our next major update is in prerelease testing and includes one of our most popular feature requests: an online scheduling tool that allows your clients to book shoots and appointments directly into your diary. You no longer need to send messages back and forth to find the perfect time, or rely on complicated integrations with third-party tools.

Setting up our online scheduling tool is quick and easy, and you can choose which types of shoot or appointment are available online. Your availability is updated in real-time as you (and your clients!) schedule events in your diary, and it’s easy for you to set up weekly availability as well as ad-hoc availability for specific types of event.

Our new online scheduling features give you the option to include a customised booking form, contract, and booking fee when a client is scheduling a shoot, making the online booking process easier than ever. It’s also tightly integrated with Light Blue’s automation tools, so the reminder emails, text messages, and tasks from your workflows help you to deliver great a great service for your clients.

We’ve opened up testing to any of our subscribers that want to take part. So, if you’d like to start offering online booking to your clients, or you’re interested in replacing a third-party scheduling system with our own, tightly-integrated scheduling system, please get in touch and we’ll let you know how to get involved.

Get more organised for less this November

Save money on our time-saving software for photographers, making your admin simple so that you can focus on nurturing relationships with your clients and growing a successful business.

Ask an existing Light Blue customer for their referral code (ending _BF21) and get 50% off your first 6 months when buying before the end of November.

The offer includes a 30 day money-back guarantee, which essentially gives you a risk free trial.

There’s not long to claim the offer, so act now to save on your subscription.

Interested in the offer but can’t find a code? Use BF2130 to save 30% off your first six months, instead.

Steps to claim the offer:

Save on your subscription by sharing your referral code with others.

Set up and customise your referral code via your account page.

Other ways photographers can save this Black Friday

We’ve also assembled a list of some great Black Friday offers and deals available from friends around the industry:

We’re entering a bumper season for major OS updates: iOS 15 is due to be released next week, Windows 11 is coming in October, and macOS 12 will probably be arriving in October or November.

We’ve been testing the current version of Light Blue with the beta versions of these major OS updates and it seems to be working well. However, please read on for our usual health warning about the dangers of installing a major operating system update as soon as it’s available!

As with all major operating system updates, it is a very sensible idea to be cautious about updating your computers or mobile devices until Apple and Microsoft have had a chance to fix some of the bugs that will inevitably be present in the next versions of iOS, macOS, and Windows. Although our testing with their betas has been positive so far, there is every chance that Apple or Microsoft could change something that breaks compatibility or that we’ve missed something because we can’t test every conceivable combination of devices and settings.

If you rely on Light Blue to run your business, we would therefore recommend holding off from updating your operating system as soon as the new versions of macOS or Windows are available. At the very least, if you really really want to update on day one, make sure that you have at least one computer on the ‘old’ operating system until you’ve had a chance to test that all of the features that you depend on are fully functional.

Also, please note that our testing has been has been focussed on the latest version of our desktop app. The vast majority of our customers are already using Light Blue 2021.2, and if you’re using older version of our desktop then please update to the latest version to ensure that you’re able to take advantage of all of the new features and bug fixes that we’ve been adding. You can update the desktop app by using the ‘Check for updates’ command (in the ‘Light Blue’ menu if you’re on a Mac, or in the ‘Help’ menu if you’re using it on Windows).

As a successful photographer, your busy brain has a lot to juggle. Names, dates, times, locations, style preferences – all the minutiae required to deliver exceptional service.

And with new clients regularly coming on board, you constantly need to update that information with details of the next shoot and the next…

With so much data to digest, harnessing the power of questionnaire tools for photographers will make the process stress-free and streamlined.

Here we explore a range of online form tools you can use to gather intel from your photography questionnaires. An easy, integrated way to supercharge your systems.