We’re entering a bumper season for major OS updates: iOS 15 is due to be released next week, Windows 11 is coming in October, and macOS 12 will probably be arriving in October or November.

We’ve been testing the current version of Light Blue with the beta versions of these major OS updates and it seems to be working well. However, please read on for our usual health warning about the dangers of installing a major operating system update as soon as it’s available!

As with all major operating system updates, it is a very sensible idea to be cautious about updating your computers or mobile devices until Apple and Microsoft have had a chance to fix some of the bugs that will inevitably be present in the next versions of iOS, macOS, and Windows. Although our testing with their betas has been positive so far, there is every chance that Apple or Microsoft could change something that breaks compatibility or that we’ve missed something because we can’t test every conceivable combination of devices and settings.

If you rely on Light Blue to run your business, we would therefore recommend holding off from updating your operating system as soon as the new versions of macOS or Windows are available. At the very least, if you really really want to update on day one, make sure that you have at least one computer on the ‘old’ operating system until you’ve had a chance to test that all of the features that you depend on are fully functional.

Also, please note that our testing has been has been focussed on the latest version of our desktop app. The vast majority of our customers are already using Light Blue 2021.2, and if you’re using older version of our desktop then please update to the latest version to ensure that you’re able to take advantage of all of the new features and bug fixes that we’ve been adding. You can update the desktop app by using the ‘Check for updates’ command (in the ‘Light Blue’ menu if you’re on a Mac, or in the ‘Help’ menu if you’re using it on Windows).

As a successful photographer, your busy brain has a lot to juggle. Names, dates, times, locations, style preferences – all the minutiae required to deliver exceptional service.

And with new clients regularly coming on board, you constantly need to update that information with details of the next shoot and the next…

With so much data to digest, harnessing the power of questionnaire tools for photographers will make the process stress-free and streamlined.

Here we explore a range of online form tools you can use to gather intel from your photography questionnaires. An easy, integrated way to supercharge your systems.

Everybody’s playing catch up at the moment. One effect of the pandemic is that the best part of 2 years of wedding work is seemingly being crammed in to a few short months. Keeping clients content while battling through the edit backlog is a challenge. The risk of burnout is real.

Let’s help you to get on top of the workload.

We’ll look at how you can buy yourself some breathing space by automatically managing your client’s expectations, and also get a clearer view of the work in the pipeline so you can prioritise your energy and spot the bottlenecks before they’re a problem. 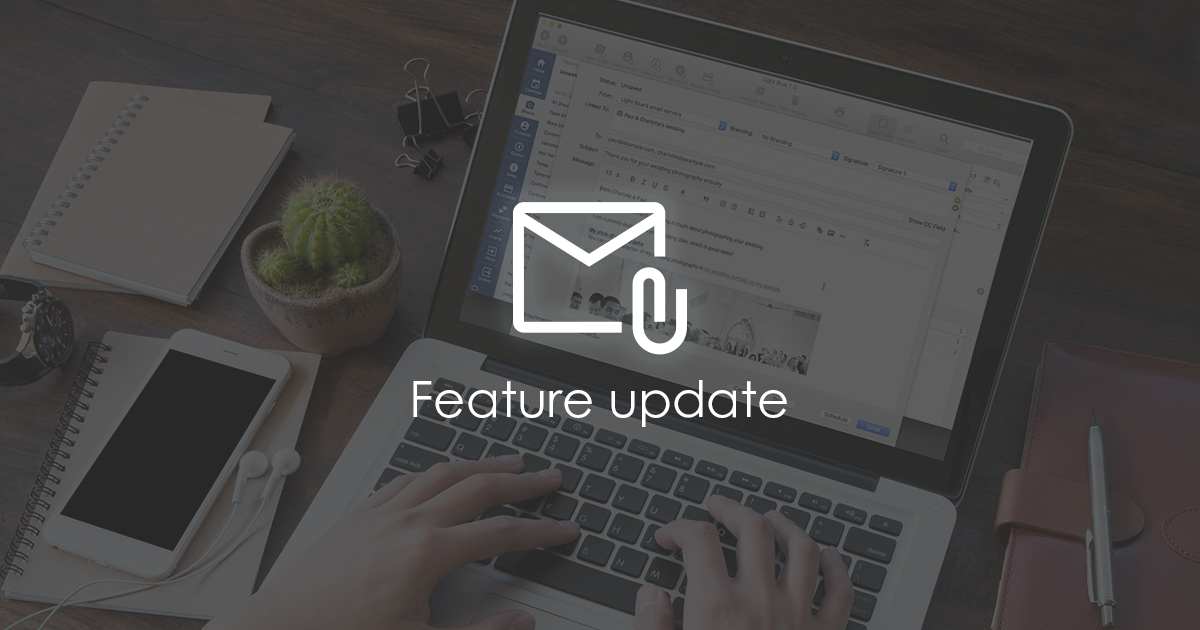 Light Blue subscribers are given a unique email address, and any emails sent to your unique email address are automatically imported into your Light Blue account. They appear in the Inbox, and from there you can use them to create a new enquiry or link them to an exist shoot or client. This makes it easy to keep all of your correspondence in one place, so that you can see the full history of your dealings with your clients.

We’re constantly updating Light Blue’s email import features to add new features and support changes in the way that major email clients format their emails, but we wanted to highlight a couple of big changes that have gone live recently.

When an email containing attachments is sent to your Light Blue email address, we now automatically import them for you. Emails up to 10MB in size are supported, and attachments with the following extensions will be imported:

Once you’ve created an enquiry from an incoming email, or linked it to an existing record, you can “promote” any particularly important attachments so that they show up on the Activity panel instead of only being displayed when you view the email. To do that, open the email from the linked record’s Activity panel, select the attachment, and click the “promote” button that appears next to it.

Improved formatting for emails forwarded from macOS or iOS Mail

To get that initial email enquiry into Light Blue, forwarding the email to your Light Blue email address is usually the quickest way to get it into your Inbox so that you can create an enquiry from it. We’ve recently improved the formatting of emails forwarded from the macOS or iOS Mail app, removing the first level of quote marks and making them easier to read.

WordPress e-commerce plugin Sunshine has added a direct link to Light Blue’s API, allowing photographers who are using Sunshine’s online proofing and ordering galleries to have their client orders sent directly to their Light Blue account.

The Light Blue API allows our subscribers to send information straight to their Inbox from a variety of sources, including online forms, booking systems, and online galleries. Orders sent from Sunshine to your Light Blue account will appear in the Inbox, and from there you can import them into Light Blue as a new order, saving you from needing to manually re-enter print orders while keeping all of your sales and invoicing information together in Light Blue.

Sunshine’s Light Blue API link add-on is available from their website. Light Blue users will need an active subscription to be able to use it, and you can find more information about our API in our knowledgebase. 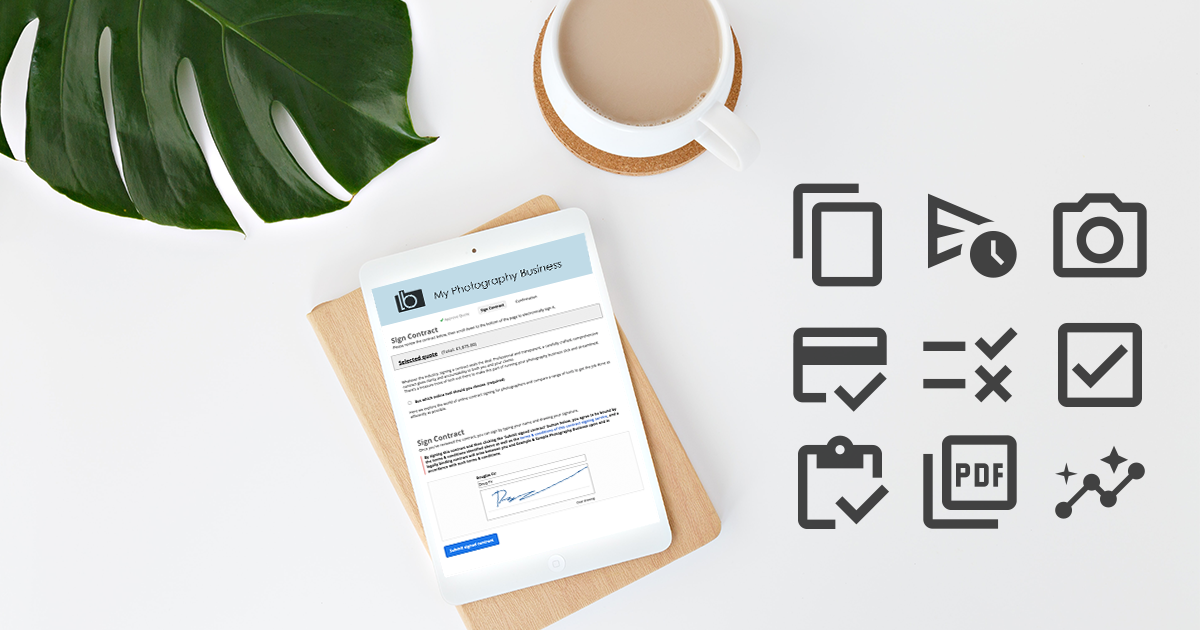 Whatever the industry, signing a contract seals the deal. Professional and transparent, a carefully crafted, comprehensive contract gives clarity and accountability to both you and your clients.

There’s a treasure trove of tech out there to make this part of running your photography business slick and streamlined.

But which online tool should you choose?

Here we explore the world of online contract signing for photographers and compare a range of tools to get the job done as efficiently as possible.

END_OF_DOCUMENT_TOKEN_TO_BE_REPLACED 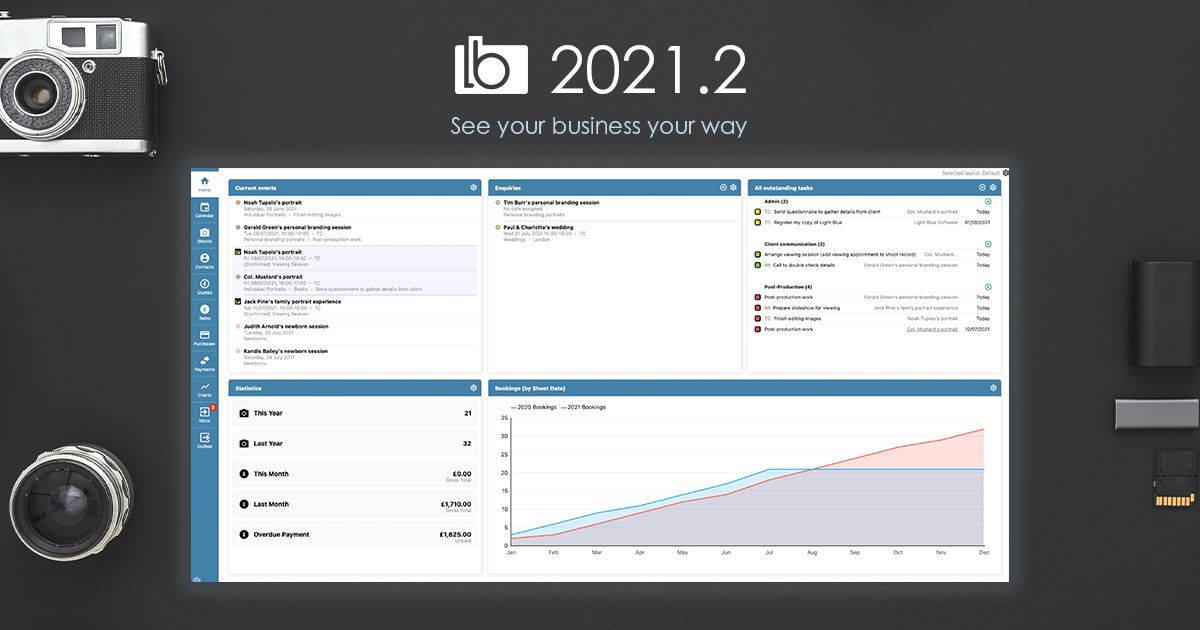 We’re delighted to announce the release of the latest version of our time-saving business software for photographers, which brings some some big improvements to Light Blue’s Home screen. Light Blue is used by a wide range of photography businesses, so in Light Blue 2021.2 we’ve built on our strong customisation options to help you to run your business the way that you want.

The tasks you do every day just got a little faster; you can see at a glance what the day, week, or month ahead holds in store; and you can do all of this while keeping an eye on the bigger picture and your long-term goals.