COVID-19: find out how we're helping our customers.

Here at Light Blue Software, we’re intimately connected to the world of photography. We live and breathe it, and draw inspiration from both our customers and the trends we see in the wider photographic world. And who can have failed to notice the biggest thing to hit both photography and cameras in the last few years – retro styling?

Take the Nikon DF. It’s a modern marvel that recalls some of Nikon’s historic design triumphs, combining modern technology with classic looks. Likewise, Olympus’ OM-D harks back to the days of chunky steel and leather. It’s clear to everyone: the past is the future.

This is all well and good for companies that have been making physical products for nearly a hundred years, but software as powerful as ours has only recently been possible, so we don’t have the decades of history behind us. At first, this seemed like an insurmountable problem, but we love a challenge, so we locked ourselves in the Light Blue secret bunker until we came up with the answer: Light Blue: Retro.

We’ve taken the 30th anniversary of the introduction of the original Apple Macintosh as a sign that we should take inspiration from that icon of software design: Apple’s original System Software. 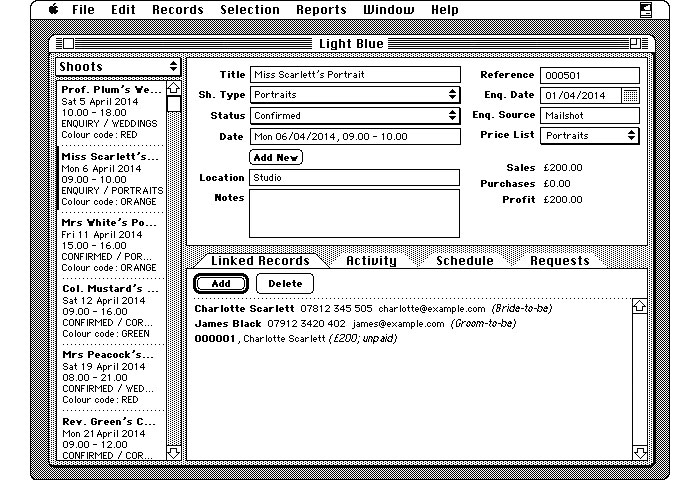 Challenges along the way

Bringing Light Blue: Retro to fruition has been the toughest project we’ve ever worked on. We’re used to building software for photographers with high-resolution, perfectly calibrated screens, so scaling the interface down to black and white and just 512 x 342 pixels was a challenge. But that was a cinch compared to the work it’s taken to make Light Blue: Retro run with just 128KB of RAM.

Whilst we think we’ve been true to our desire to take inspiration from classic software, we’ve had to make some compromises along the way. The Internet didn’t really take off until the 1990s, so to be really authentic we’d need to implement syncing simply by telling you to phone up any of your other members of staff and tell them what you’d changed. However, we know that lots of our customers rely on our online services, so we’ve given ourselves a bit of leeway and optimised our remarkable data sync system to work over a 14.4Kbps modem.

We’ve been testing Light Blue: Retro for the last few months, and our beta group loves it. Ian St Agram, one of the group, comments “The Light Blue team is always innovating, and Light Blue: Retro is just fantastic. They’ve really managed to recreate the spirit of early computers, right down to the blocky fonts, tiny screen layout, and slow response times. It brings back so many happy memories!”

We’re banking on Light Blue: Retro being a hit, so we’ve halted all development on Light Blue 5 to really improve the Retro version. Future improvements include a Windows version (compatible with Windows 3.1, of course), support for 28.8k modems, a load time of less than five minutes, and the possibility of shipping Light Blue: Retro on laserdisc. Watch this space for more announcements!

Light Blue: Retro is available today, 1 April 2014, and is supplied on twenty-seven 3.5″ floppy disks. For full pricing details, visit our website; we’re accepting payment by cheque, which can be posted to the secret Light Blue bunker. We’ll be showing it off at the forthcoming Digital Imaging Roadshows in Dublin, Belfast, Bolton and Bradford, so do come along and say hello to us there.

Light Blue 5 brings a host of new features to our award-winning business management software for photographers, making your admin easier and helping you run a busy and successful photography business. To find out what’s new in Light Blue 5, read on!

Edit Sales after you’ve invoiced them

In Light Blue 4, once you’d created an invoice, it couldn’t be edited. Sometimes, however, you need to make a change to one you’ve already sent; in Light Blue 5, you can now edit invoices once they’ve been created, which gives you the flexibility to deal with customers changing their minds.

Being even more useful

Keep track of time off

It’s now really easy to note down when people are out of the office, or when equipment or rooms are unavailable, with our new Time Off features. You can block out time from the built-in calendar, with just a double-click on the relevant day, and any sessions or appointments which clash with time off will be shown in red, so you can easily see if you’re scheduling something when you’re not available.

Light Blue 5 is available now. It’s free for subscribers to our online services, or available for a fee to everyone else – for more info, hit the Buy link in the top bar.

Check out our video above for more on how ThinkSync can help you revolutionise your business. And, when you’ve done that, download a free, fully functioning trial of Light Blue!

You can pre-order your ThinkSync headset today; we’re aiming to ship them at the end of April.